ORDER NOW
ProfileSIGN IN
This secret comedy show takes place
in quirky NYC locations
Organizers David Levine and Ethan Mansoor perform at La La Laundry.
Stefano Giovannini
By Zachary Kussin
‍August 4, 2021 | 5:23pm | Updated
The joke’s on you if you think an Upper East Side gym, an Alphabet City art studio and a nearby laundromat have nothing in common.

Since April, each spot has doubled as an after-hours venue for Underground Overground, a buzzy word-of-mouth comedy show popping up in unusual locations around town. It’s luring in known comedic names, such as Mark Normand, Sam Morril and the late Jackie Mason’s daughter, Sheba Mason, for sets. And although tickets are only available by messaging the event’s organizers on Instagram, they’re selling like hotcakes.

The next show, scheduled for Aug. 5, will return to that same Alphabet City laundromat, La La Laundry. The following week, on Aug. 12, Underground Overground — a name that nods to its surreptitious nature — will head to Invite Only Studios, a recording studio in Chelsea.

“We want to create an experience,” said 23-year-old David Levine, an Upper East Side native who co-created the show with 22-year-old Ethan Mansoor. The pair met as youngsters on the P.S. 6 chess team.

“When you walk into the venue, you’re like, ‘This is a comedy show? What the hell is going on?'” Recently, the pair hosted a gig on a friend’s rooftop on East 11th St., where the audience had a panoramic view of the skyline. Levine said that’s what they’re looking for in a spot: “We want that wow factor to surprise you.”

Mansoor, who also grew up on the Upper East Side, added, “I think it’s interesting for the people who come to our shows regularly to see the range of places that we get to.”The two say they’re in talks with the East Village location of Staten Island pizza joint Joe & Pat’s for a summer show, as well as with downtown streetwear shop Stadium Goods and a COVID-19 testing site for potential pop-ups down the line. But the latter will have to wait.“The COVID testing site said we would be good to go if it wasn’t for Delta,” said Levine of the coronavirus variant now spreading across the nation. 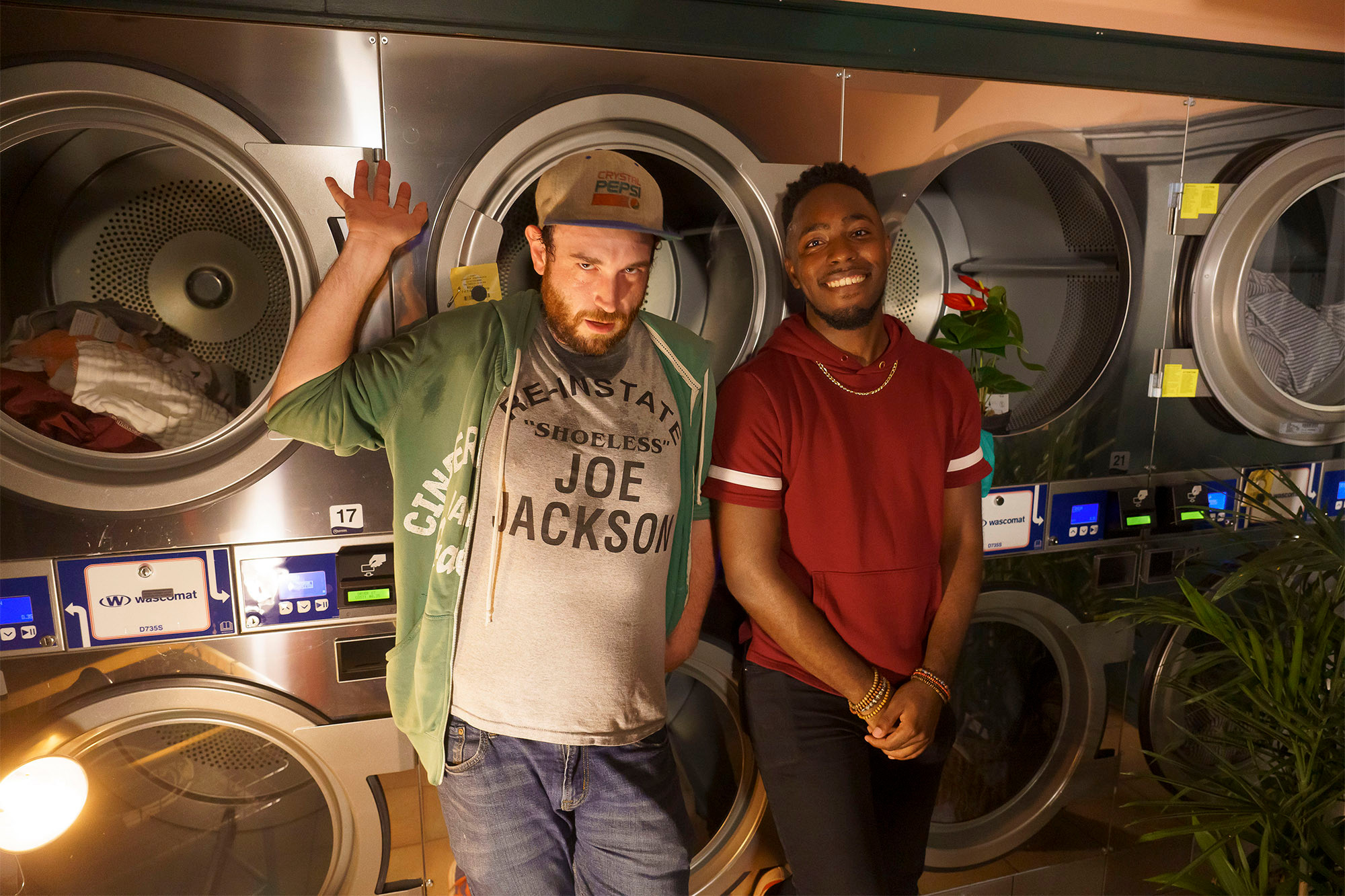 The two had long frequented city clubs, such as the Stand, and while Levine put on stand-up shows during his years at Syracuse University — Mansoor, who attended the University of Chicago, wrote jokes on his phone with the hope of one day telling them to a crowd. (Now, at each Underground Overground show, the two do a set together.)

“‘Hey, we could put on a show,’” Mansoor said he told Levine at the time. “‘Let’s just do something for our friends. I bet we could find a space.’”

Two months later, they did — at Initium Novum Club, an Upper East Side gym opened by a trainer who helped Levine with a torn-ACL recovery five years prior. About 30 people came for sets by Normand, who has appeared on “Conan,” and comedian and writer Jay Jurden. Later that month, Underground Overground headed to an art studio, IDC Art House, on Avenue B, which included a set by “SNL” writer Nimesh Patel. 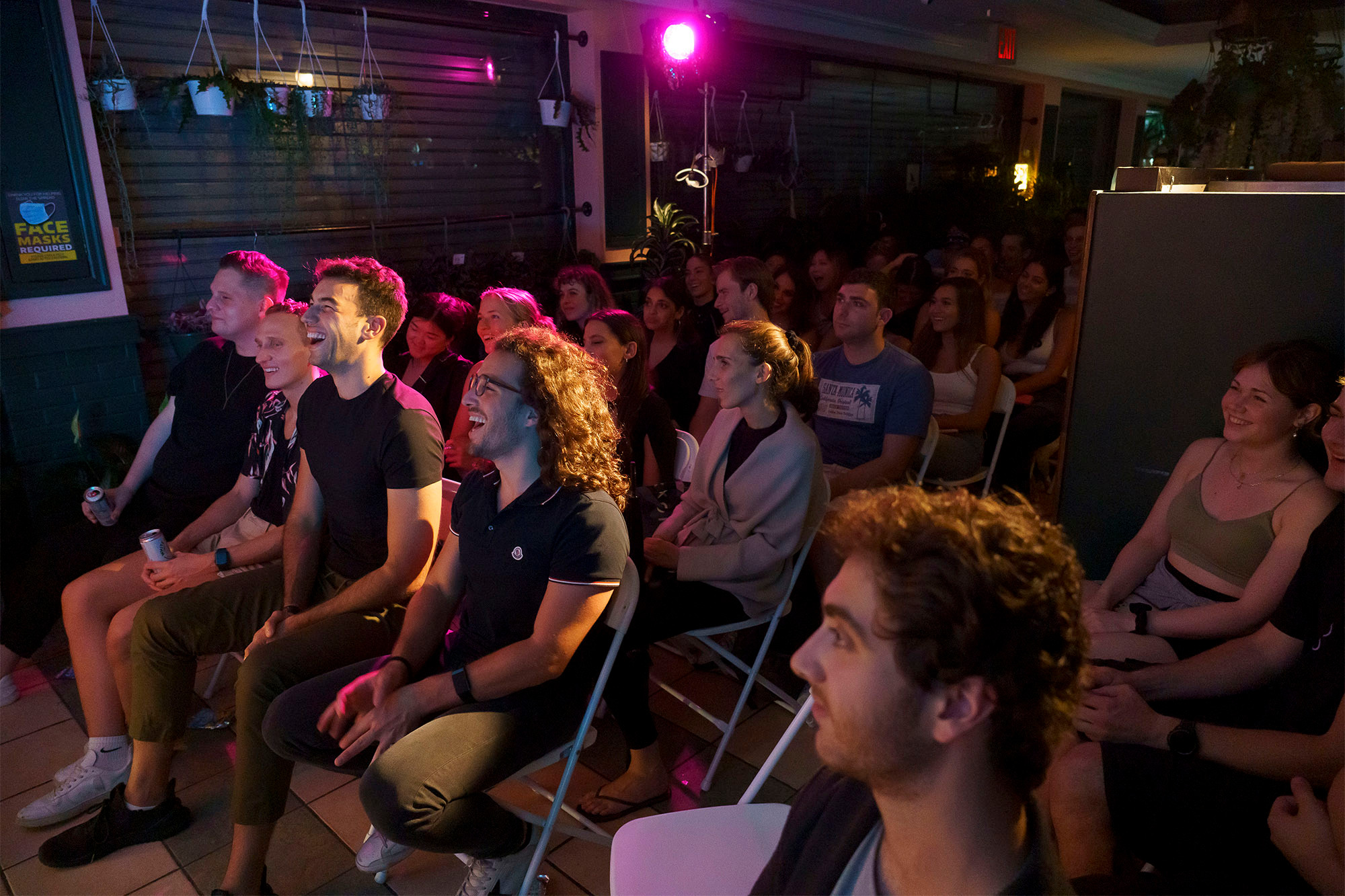 All the while, the friends kept spreading the word in an effort to get more guests.

As cool as the quirky venues are for the creators and their audience, they’re just as fun for the comics. Phil Hanley, a Canadian comedian who’s appeared on “The Tonight Show Starring Jimmy Fallon” and Comedy Central, has performed at two Underground Overground pop-ups — most recently in July at La La Laundry.

“It’s kind of fun to go from playing comedy clubs for 16 or 17 years, and all of a sudden you’re like, ‘Oh, jeez, I did my laundry here two days ago,’” said Hanley, who lives nearby.

He added that the space’s layout allowed for a more intimate atmosphere. “It was a low ceiling, the fact there are dryers and washers everywhere made it condensed.”

(Levine and Mansoor ask for proof of vaccination and check IDs to make sure everyone is over 21, but there’s no indoor capacity limit.)

The co-creators book the comics themselves and approach individual businesses to ask if they can put on a comedy show in each space.

“We set days during the week where we just walk around Soho, downtown — we walk into every store we think we could possibly do a show,” said Levine. “We’re not afraid of a ‘No.’ We’ve been told ‘Get out of here!’ and ‘What is wrong with you?’”

Each show lasts nearly two hours and puts on an amateur comic in the first set. Tickets cost $40 and include unlimited drinks, usually drawing a young crowd looking to pre-game before a night out. The pair said that each show draws an increasing number of first-time attendees. 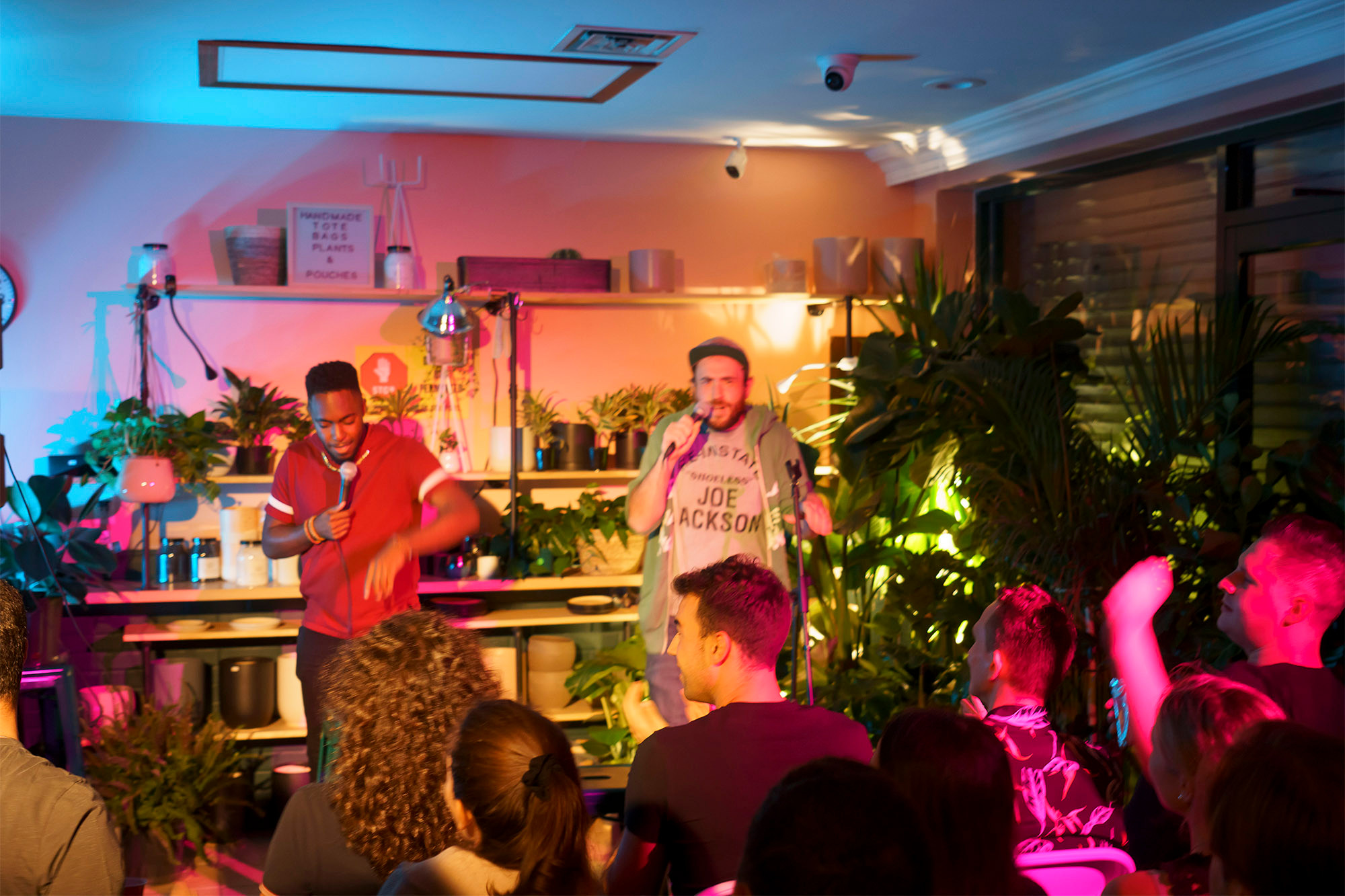 Drexton Clemons (left) and Eitan Levine (right) delight the audience at La La Laundry.
Stefano Giovannini
“We will absolutely get random texts, random DMs, like… ‘I heard about your show, when’s the next one?’” said Mansoor, adding there’s more than just laughs in store for interested guests.

“It’s an experience that I haven’t been able to find on my own in New York. We’re trying to put on an experience that we would love to be given the opportunity to go to ourselves.”
FILED UNDER COMEDY, ENTERTAINMENT, MANHATTAN, STAND-UP COMEDY, 8/4/21